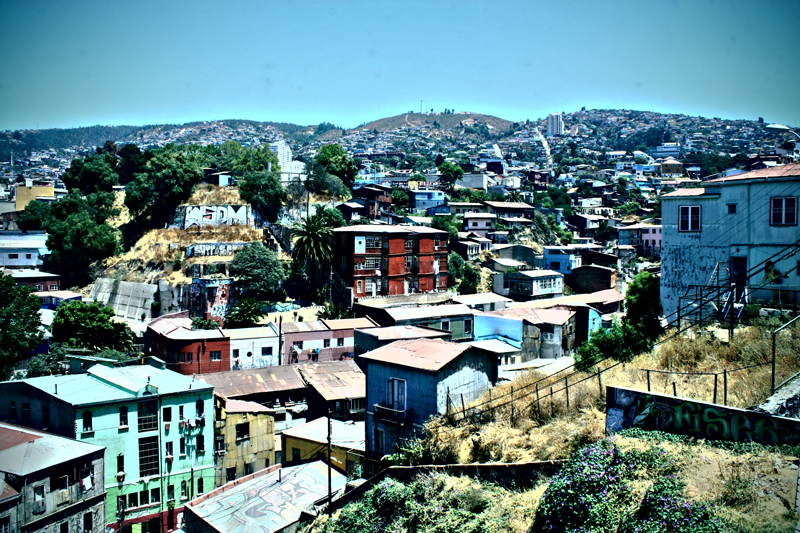 Mix the winding streets of Rome or Venice, the graffiti of Berlin, and the steepness of San Fransisco and you´ve got Valparaiso, a city famed for its bohemian feel and wall to wall street graffiti. Its hard not to fall in love with this unusual destination with its colourful houses seemingly stacked on top of each other on dozens of steep hills which overlook the harbour. The city is captivating – edgy, gritty, dirty and stunningly beautiful all at the same time.  It’s not hard to see why the literal translation is Valle Paraiso (Paradise Valley) and is protected as a UNESCO World Heritage site.

Valparaiso’s people are friendly, bohemian, spontaneous and most importantly artistic. Poets, painters and would-be philosophers have long been drawn to Chile’s – no, Latin America’s – most unusual city. They truly embrace art in its many shapes and forms in this city- ‘anything goes’ here.

Its ascendadors (outdoor cart elevators) are one of the world’s 100 most endangered historical treasures – ONLY 16 still remain in operation. Traditionally run by coal they were used to transport its inhabitants up and down the steepest of hills every minute of every day but nowadays serve more like a tourist attraction.

The city is unfortunate enough to be prone to many earthquakes. Valparaiso was quite badly damaged by the earthquake that shook Chile in February 2010 and the evidence of the destruction still remains, despite years of reconstruction (like a giant game of Jenga). There’s many things to see and do in this place, with nearby sea resorts Vina del Mar and Concon within driving distance. The seafood is incredible; ceviche, lobster, you name it! Not surprisingly, the city is called the Jewel of the Pacific, and is in my opinion the world’s greatest city.