On the outskirts of Siem Reap in north-western Cambodia lies Angkor, the capital of an ancient and powerful Khmer Empire. You have to be up early to witness the sunrise over the famous Angkor temples. Despite the masses who jostled for position around the lake that morning, it was truly a wonderful sight and worth the early morning struggle. For the remainder of the day it was all go go go as we explored all the different ruins. 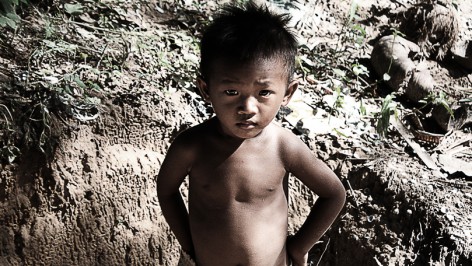 Ta Prohm was a favourite of mine and I should think every budding photographer’s. Known as the Jungle or Tomb Raider one, it is situated about a kilometer from Angkor Thom. The temple has fought nature for years and it is clear nature won. Colossal trees tower over the grey stoned ruins, their long winding roots scramble over the rocks, walls, stupors, and temples. They curl and clutch around the foundations and gradually the weak stoned structures give way and collapse on top of the last victim.

The vines hang from the trees and tangle themselves amongst each other.
I could have gone back to this temple time and time again and easily found something new to look at. Ta Prohm is tragically beautiful in its ruinous state.

The day progressed well, despite me feeling a little unwell under the intense heat but some constant coconut drinks helped greatly. If it weren’t for the abundance of little children selling drinks, postcards, painting, jewelry and God knows what else I would have had little to complain about. Sadly the children are waiting to accost you the second you disembark your tuc tuc. And they have an answer for just about everything you might say to persuade them that you don’t really want to buy another bracelet, and they will remember you if you mutter a “maybe later”…