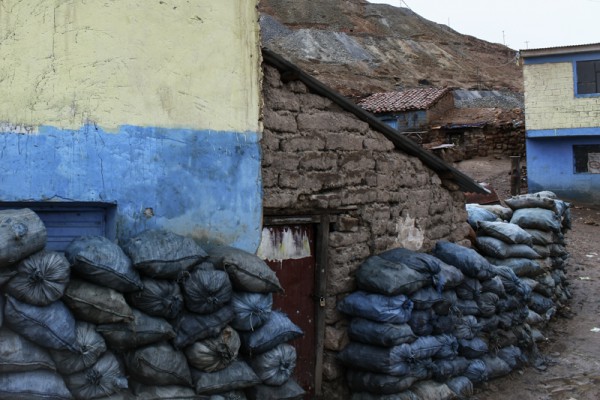 “The mountain that kills” Potosi, Bolivia

Potosi is the highest city in the world at just over 4000 metres. The combination of thin air, dodgy stomach and a slight head cold meant choosing a trip to the Potosi mines, with its narrow tunnels, dust and asbestos was probably a bad idea.

Founded in 1546 as a mining town, it wasn´t long before Potosi was producing incredible wealth from mining silver and at one stage was one of the richest cities in the world during the 16th century. Bigger than Paris or London! The mine is still active today, where the average life expectancy of the miners who work there is 40. 500 or more children as young as 7 or 8 can be seen working away in the tightly created spaces. My trip to the mines begins at the market stalls, where you can purchase mining hardware, cigarettes, coca leaves, alcohol, dynamite and fuses. Everything you need for one hell of a party! I´m not sure what was more dangerous, the dynamite or the 95% proof alcohol we would later drink to celebrate.

At the entrance of the mine cave you can see dark patches of Llama blood from a local ceremony that involves offering llama blood to ‘El Tio‘ the god (or more accurately the devil) of the mine to satiate his needs, in the hope that he won´t want the blood of the miners. There are hundreds of different mine shafts in the Cerro Rico mountain but they all have a statue representing Tio at some points. The Potosi miners, like most Christians, believe God rules above the ground, but to them Tio rules underground it is for this reason they must make daily offerings to him in order to keep them safe in the dangerous working conditions. When letting off the dynamite, they must count the number of exploded dynamites carefully, as if you haven’t given praise to Tio he will hold back on some of the explosions until you’re next return.

The tiny shafts, dizzying altitude, and working conditions make this one of the most ungodly places to be. The miners work for themselves, day and night, but on the weekends the mines are usually quite empty. So where are the miners today I wonder? Turns out they’re getting shitfaced down at the local market on 96% ceboa of course!!!
The whole time in the mines, I’m struggling to not collapse. When it comes to the end of the tour; with a possible chest infection, dry mouth, sore chest, urge to fart, need for the bathroom, dodgy stomach, sore throat, dusty eyes, smelly clothes, dust riddled hair, unhealthy lungs, lack of energy, appetite for destruction and generally feeling like shit- I’ve never been so glad to see the light at the end of the tunnel…

10 Ways To Die by Hitchhiking

10 Ways To Die by Hitchhiking