Rio is an exciting yet unusual city – high rise buildings against a backdrop of beaches, mountains and blue skies! I stayed in Copacabana area just a few blocks from the beach in a hostel that really makes you feel at home. There’s a promenade the length of the beach which meant no excuses for not running or doing some daily exercise. You feel guilted into it by the
many people running, cycling, blading, tightrope walking and volleyball! It also makes for a highly entertaining people watching when many of the people running past look like Slater from Saved by the Bell (or in some cases look like pregnant Slater 40 years older but still like to wear speedos!!) Dotted along the prom were mini gyms – basically just stainless steel bars designed for exercising – where loads of ego driven strange species pump the guns!

Its quite easy to tick all the tourist boxes during a stay in Rio as there´s not an excessive amount of things to do (despite hundreds of museums and beaches)! No trip to Rio is complete without visiting the favelas districts (not during the night of course) Favelas are large communities which surround the city and are effectively built into the mountains of Rio, apparently there are approx 1,100 favelas in Rio and the one I visited (Rocinha) was said to house over 80,000 people! Most are controlled by drug lords but the Brazilian police are aiming to gain control of many before the World Cup in the hopes of cutting down on
violence. 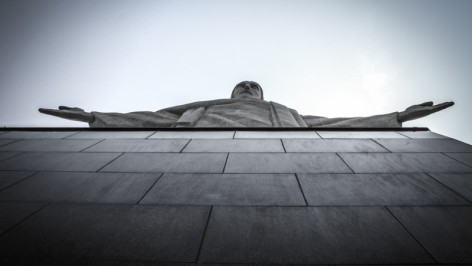 Its a strange place in that its not as Slumdog millionaire-esque as your preceptions may seem. Its not unusual to pass business men on their way to work walking by casual teenagers leaning on a machine gun at the side of the road! To get to the high built up area´s one must ascend up a series of steep, winding hills via motorbike, which was an experience in itself, literally 2 days in the country and your speeding up a mountain clinging onto the back of some dudes bike who has been paid the equivalent of 86 cent for the privilege!! Helmets, what helmets? While in some ways it felt like we were seriously invading the peoples’ lives – a stream of “gringos” wandering through their home in single file – most were very friendly, especially the kids, and I suppose they benefit hugely from the tours what with “donations” as the tour guide calls them but am sure there’s an agreed payment arrangement with the Head Honcho!

Catching the sunset ontop of Sugar Loaf mountain (after hiking up of course) is a really rewarding experience. You see for miles in the clear bright red sky to the outline of the mountainous landscape and down to the bright sparkling lights of the city and beaches with Christ the Redemer (one of the 7 new wonders of the world) standing high ontop of Corcovado mountain with open arms. A visit to the district of Santa Teresa is one of the highlights of Rio where one can eat feijoada (black bean, rice and some green veg) or some açaí (berry sorbet with granola or banana) in some real authentic Brazilian restaurants.From there you can head onwards to the Escadaria Selarón (steps of Lapa) (where U2 and Snoop Dogg have shot music videos) and the Tijuca forest and surrounding waterfalls to escape from the busy city vibe. A Friday night street party under the bridges in Lapa, is a weekly event that rivals any street celebration in the world. The streets are lined with locals playing samba drums, street vendors selling everything but the kitchen sink, and bustling hip hop nightclubs to keep you going till sunrise. Don´t expect to be home any time before 6am and don´t bring any valuables as you will literally get hands in your pockets all throughout the night as you dance away.

🏰 Check out this Airbnb we just rented. Comes w

Is there a more beautifuly designed structure? #al

Catching some much needed Vit D after about a week

Waiting for the sun 🤞

Nothing better for the soul then the mountains...

Today I speak for everyone in Ireland right now dr

📸 Magic early evenings in Svalbard. One of the